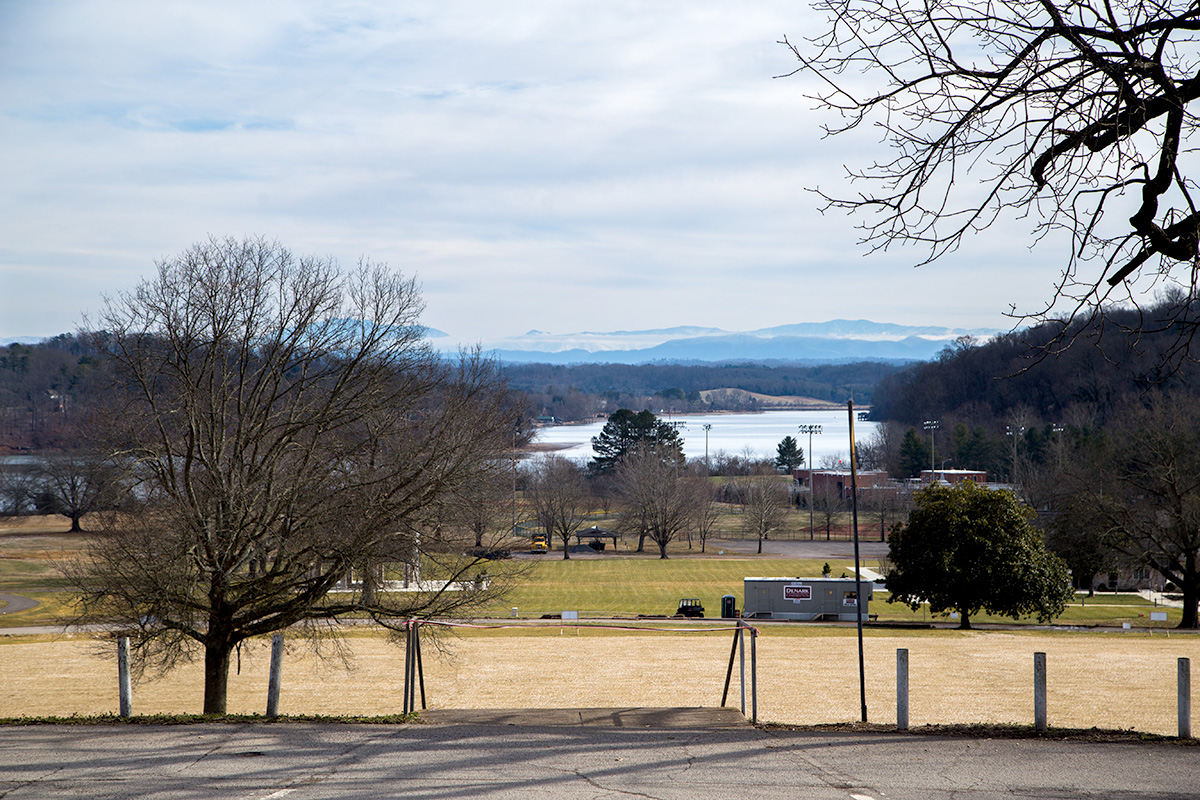 The Lakeshore Park Board and Mayor Madeline Rogero announced today that Scripps Networks Interactive has donated $3,000,000 to Lakeshore Park for the construction of a new scenic overlook which be named in honor of pioneering home and garden cable network-HGTV.

Dee Haslam, the Lakeshore Park Board Chair, accepted the gift on behalf of the Park. “Scripps Networks Interactive has been a long time supporter and has sponsored employee work days and other events at the park,” Haslam said. “We are very excited Scripps has decided to increase its investment in Lakeshore.”

Where Will the Overlook Be?

Haslam said the project will be located in the center of the park, on the hillside below the historic administration building. The announcement was made from the project site. The view from the site is considered one of the most spectacular views in the City of Knoxville. It includes the events field and Park lawns and continues along the Tennessee River toward the Great Smoky Mountains. The vista includes Chilhowee Mountain in the middle distance and some of the highest peaks of the Smokies. Those peaks including Mount LeConte at 6,593 feet and Clingman’s Dome at 6,642 feet.

The site is already popular with park visitors, who can watch the sun rise over the Smokies or have lunch while enjoying the view. The new facility will include seating areas and other architectural improvements on the upper level, with terraced gardens leading to the fields below.

“Scripps Networks is a great asset for Knoxville and an outstanding corporate citizen. I am very grateful for this generous donation in HGTV’s name to develop the Lakeshore Park overlook,” said Mayor Madeline Rogero. “This overlook will serve as a front porch for all of us to enjoy our community’s natural splendor.” She added, “it highlights the value of conserving our precious land.”

The HGTV project will be designed by Thomas Woltz of Nelson Byrd Woltz Landscape Architects, a 45-person firm with offices in Charlottesville, Virginia, and New York City. The firm has designed major public parks across North America and New Zealand, including the new master plan for Centennial Park. The firm is known for its innovative design and its commitment to environmental stewardship. The project is scheduled for completion in Summer 2019.

Scripps Networks Interactive is a leading developer of lifestyle content in the home, food and travel categories for several platforms. Its HGTV network has been based in Knoxville since it went on the air in December 1994. Scripps’ lifestyle portfolio includes HGTV, DIY Network, Food Network, Cooking Channel, Travel Channel and Great American Country. Collectively these six channels alone reach more than 190 million consumers each month. Scripps Networks has over 1000 employees in the Knoxville area and over 3500 employees worldwide.

Ken Lowe, the founder of HGTV and Chairman, President & CEO of Scripps Networks Interactive, presented the $3,000,000 check on behalf of the company. “I believe one of the most important ingredients in the recipe of success for HGTV has been its Knoxville home,” said Lowe. “We’ve spent more than two decades inspiring people’s love of home and garden, and now we’re honored to memorialize that in this beautiful spot to be enjoyed by East Tennesseans for years to come.”

Lakeshore Park is the most utilized public green space in Knoxville. The park’s 185 acres welcome hundreds of thousands of visitors each year who use its walking trails, athletic fields, playgrounds, farmers market, event spaces, open green areas and enjoy the river and mountain views.

Lakeshore Park is managed by Lakeshore Park Conservancy. The Conservancy is a non-profit section 501(c)(3) corporation that manages construction and operation of the park on behalf of the City of Knoxville. Funds contributed to Lakeshore Park’s capital campaign and annual fundraising programs go toward improvement of the park and enhanced maintenance of the park facilities and landscaping.

Over the past two decades of practice, landscape architect Thomas Woltz has forged a body of work that integrates the beauty and function of built forms with an understanding of complex biological systems and restoration ecology. As principal of Nelson Byrd Woltz Landscape Architects (NBW), a 45-person firm based in Charlottesville, Virginia, and New York City, Woltz has infused narratives of the land into the places where people live, work and play, deepening the public’s enjoyment of the natural world and inspiring environmental stewardship. NBW projects create models of biodiversity and sustainable agriculture within areas of damaged ecological infrastructure and working farmland, yielding hundreds of acres of reconstructed wetlands, reforested land, native meadows and flourishing wildlife habitat.

In the founding tradition of landscape architecture, NBW is committed to aesthetic and environmental excellence, social commitment and innovation. The firm has been instrumental in steering landscape architecture towards integrated, ecologically performative design, relying on science based methodology and collaboration with a wide range of systems experts. NBW has dramatically expanded the traditional role of landscape architecture into the areas of restoration ecology, urban planning, civil engineering, and agriculture. In the past two years, NBW has been entrusted with the design of significant public parks and cultural institutions in the United States, Canada, and New Zealand, placing 30 years of design innovation in greater service to the public realm. For more information, please visit http://www.nbwla.com/.